Dan and I had been best friends ever since grade school. It was kind of odd because I was always a nerdy geek and Dan was a muscular jock, but the most amazing thing about Dan was the size of his cock. It was 14 inches long and as big around as a pop can.

You might ask how I knew this. I guess it’s not normal for straight guys to notice the size of another guy’s dick, and especially when it’s hard, but I did. I first saw it when he was messing around with a girl at the back of a classroom in summer school. I couldn’t believe the size of his cock, as he pulled it out for her to feel. I guess from that day forward I always included Dan’s cock in my masturbatory dreams. I guess I had a complex or something, but I couldn’t get his monster dick out of my mind when I was really horny.

When we went away to college, we became roommates in an off-campus apartment. Dan always had women hanging all over him. When he had girls over, he usually left the door of his room open a little bit so that I could watch him in action. After he broke them in, they kept coming back for more. Most girls, when they first saw his cock, would scream and say that he was too big but after a little bit of alcohol and a lot of coaxing on his part, he would stretch them out so he could fuck them and more than a few of them succeeded in taking him all the way.

Dan enjoyed introducing new girls to his monster cock and it seemed that there was never a shortage of willing ladies. Back then, my sex life was pretty much limited to watching Dan. I occasionally dated and got laid when Dan set me up. 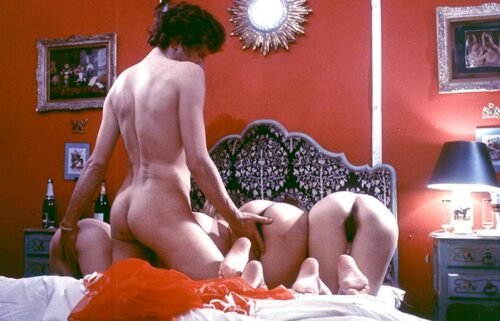 Then I met Robin. Robin was a good girl. She taught Sunday school, and she worked with underprivileged kids. She was a virgin when we met and said that she would stay a virgin until she got married. Robin was very conservative and modest. She had a good figure but always covered it up with baggy sweaters and loose-fitting clothing.

Dan would ask me all the time when I was going to fuck her. I told him that she wasn’t that kind of girl. But Dan said that all girls were “that kind of girl” if they found themselves in the right situation. He told me to hurry up and fuck her or he would have to do it for me. I laughed at that just thinking that he was being macho and would never do that to me. Especially since I loved Robin and wanted to marry her, and he knew it.

One night, Dan and Karen double dated with Robin and I. Karen was a real sexpot who had extremely large breasts. She was a regular visitor to Dan’s bedroom. After going to a club, we went back to our place. Robin and I were pretty drunk and we watched a movie while Dan and Karen went to Dan’s room. We could hear them fucking away loudly. After what we guessed was three times, they finally came out. Dan said that he had to take Karen home because she had to get up early the next morning for exams.

Robin decided to spend the night on our sofa because she thought she was too drunk to drive home. I fixed her bed then went to bed myself.

She was another one who wanted to feel his cock

A couple of hours later, I woke to whispered voices. I tiptoed to the door and peaked out. Dan was talking to Robin and Robin was asking Dan about the many girls that he had slept with. To my shock, she also asked Dan if the rumors about his big dick were true. Dan coyly told Robin that the rumors were why so many women were chasing after him. Then I heard him say that to find out if it were true or not, she would have to sleep with him.

I knew that I should have walked out and stopped the whole thing but I was paralyzed as I sat there listening. I could see Dan’s hand rubbing Robin’s naked thigh as they talked. Robin made no attempt to stop him. Soon his hand disappeared under Robin’s clothes.

My heart just about stopped when I heard Robin moan in response. He must have hit the target because Robin began moaning louder. Her moans became more urgent, not like the moans I got when I fondled her tits. Still paralyzed, I watched as Dan slowly took off Robin’s underwear and proceeded to eat her virgin pussy.

She began to moan louder and even screamed. It was obvious that she was having an orgasm. Then Dan stood up and Robin also stood and she began unbuckling his belt. His pants fell down around his feet. As she pulled his underwear down, you could see the base of his cock, but his massive dick didn’t pop out, it was just hanging down between his legs. I heard robin gasp. She said that the rumors didn’t do him justice. He was the size of a horse. She measured it with her hands. It took five of her petite hand widths to reach the top and took both hands to reach around.

I could tell that Robin was under Dan’s spell and would do anything that he told her to do. I’d seen lots of other women come under Dan’s spell, but I could hardly believe that my dear sweet Robin was being seduced by him. She was trying to get the massive head into her mouth, without much success, and had to resort to just licking him.

After a few minutes, Dan reached into the end table drawer and took out some Vaseline. He handed her the grease and told her to lube him up so he could fuck her. Robin was still drunk and now filled with passion too that her mind was clouded. I knew that if I let them go through with it that he might rip her virgin pussy wide open. I also knew that things would never be the same for Robin and I again. But, for some reason, I was still paralyzed and could only sit there and watch.

I watched with sinking heart, as she lay back with her pussy wide open. He moved into position over her with his massive dick at the entrance to the Promised Land. She screamed at the top of her lungs as he slowly pushed into her. Soon he was fucking her with 3 or 4 inches. Gradually he got about 7 inches up her and they fucked for a half hour like that until they both noisily came.

After this incident, I continued to date Robin but she never let me fuck her. She said that she had to be an one-man woman and that Dan had been her first; that she loved me but needed his big cock to be truly satisfied. Dan continued fucking her 3 or 4 times a week until graduation, and then Dan went his separate way.

After college Robin and I got married. I know where my place is. I love Robin and enjoy oral sex with her, but we never fuck because I know that I can never really satisfy her now that she’d been stretched out so much. Only a stud with a truly huge dick could satisfy her now. At home and to the outside world she is a prim and proper lady. But I’ll always know that there’s some big cocked stud fucking her on the side.