Madeleine was working late with her new boss Deirdre. They’d been working late for two weeks trying to tidy the mess left by the previous manager. At last they’d cleared the backlog, Deirdre sighed, looked directly at Madeleine, and stretched up her arms – her large soft breasts pushed forward in her skintight jumper making it ride up to reveal a stretch of suntanned stomach.

– I think this calls for a celebration.

Madeleine was disturbed by the sinking feeling in her stomach when she’d looked at Deirdre’s breasts, her firm, erect nipples and her naked stomach. She’d never felt that way before looking at a woman, wanting to reach out and touch her. Perhaps it was tiredness.

Madeleine went to the mirror and stood there putting on her makeup. She was surprised and excited to feel Deirdre come up close behind her. Deirdre was smiling at her in the mirror.

– Thanks for all your help over the last weeks – she said leaning against Madeleine. Her soft breasts pressing against Madeleine’s back, her hands alighting lightly on Madeleine’s hips. She kissed Madeleine lingeringly on the neck. Her lips were soft and wet. Madeleine felt an excited shiver run through her.
– Think nothing of it. – Deirdre slid her hands round onto Madeleine’s stomach, stretched them over and down her tingling flesh, pulled Madeleine back so that Madeleine’s buttocks pressed against the curve of Deirdre’s taught stomach. Deirdre gave a faint gasp, held Madeleine like that briefly, kissed her again then moved away. Again, Madeleine felt a dropping feeling in the pit of her stomach. This was her boss. There had been no hint of anything like this happening between them before.
– If you won’t come out celebrating with me, will you have a drink with me before you go?
– I don’t know. – Madeleine was beginning to feel aroused and excited.
– Just a quick glass of wine?
– All right, then.
– Come into my office. – Deirdre drew the curtains in the spacious office and turned the key in the door. – We don’t want security disturbing our quiet little drink, do we?
– No.
– Sit down on the couch. Kick off your shoes. Relax. You deserve it. I think we both need to unwind. – Deirdre sat beside her on the couch. They sipped the wine. It soon made them both feel more relaxed and mellow.
– I think we could become friends, don’t you, Madeleine?
– Well… yes. I think so?
– I must say I’ve taken to you. – She laid her hand on Madeleine’s arm.
– You are such a sweet girl.
– I don’t know about that.
– But you are. And so pretty. I feel quite envious of you.
– But you are beautiful.
– Am I? What makes you say that?
– You just are. – Deirdre’s hand moved easily from Madeleine’s arm to her knee.
– You’re just saying that.
– No I’m not. You have a lovely figure.
– And what do you like most about my figure? 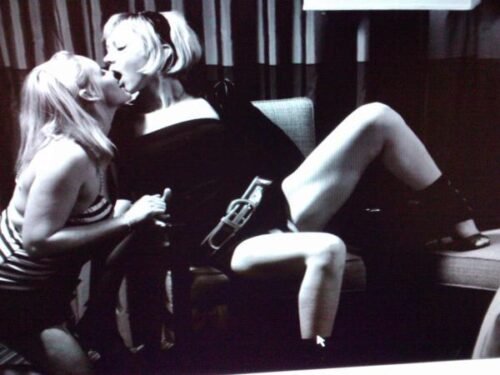 – I don’t like to say, really. All of it. I must be going. – Deirdre’s hand had moved imperceptibly from Madeleine’s knee upwards towards the hem of her short skirt. Madeleine tried to ignore it but heard herself swallowing and felt an excited pleasure and dampness between her legs.
– You don’t like being here with me? I thought you would?
– I do. – Her throat was dry. She felt like a stupid little girl.
– Then stay for a bit. I’m sure you will enjoy yourself.
– Will I?

Deirdre’s hand now slipped between her legs, was moving slowly backwards and forwards pushing more and more against both legs and against the hem of her skirt. Madeleine closed her eyes.

The sensation between her legs was as exciting as she’d ever felt before. She eased open her legs.

– That’s better – said Deirdre, and slipped her hand slowly and gently further up between Madeleine’s thighs. Madeleine was breathing deeply now, waiting and wishing for Deirdre’s hand to touch her wet cunt.
– You like that?
– You know I do.
– Yes.

Deirdre’s hand touched Madeleine’s pants making her sigh and lean back opening her legs. What was she doing? Deirdre was kneeling between her legs. She eased herself up and Deirdre pushed up her skirt up until it was above her waist. Deirdre leaned forward and kissed the outside of her pants, rubbing her nose in the musky dampness. Madeleine groaned and stretched her hands down until they reached Deirdre’s large soft breasts. She stroked them, pressing the nipples with her thumbs.

Deirdre’s fingers found the elastic of Madeleine’s pants. Madeleine eased herself up, felt Deirdre’s breasts slip away and her pants and tights slipping off. When Deirdre came back against her, her breasts were naked, the nipples erect. Madeleine squeezed Deirdre’s breasts and heard Deirdre gasp. Deirdre eased Madeleine forward on the couch till her buttocks were free. She opened her legs wide and Madeleine felt Deirdre’s large, full lips press against her cunt, her tongue begin to lick her cunt lips, this way and that, soft, tantalizing and then, when she thought she couldn’t bear it any longer, she felt her hard, long tongue enter her. She groaned with pleasure.

Deirdre’s tongue found her erect clitoris and licked and prodded it sending wild pleasure up though her. Deirdre’s finger entered her, in and out, then two, then three. Then she felt a juicy finger feeling for her anus. It found it and slipped in. She groaned again. Deirdre started to move her fingers and her tongue in a steady rhythm. The pleasure was unbelievable.

– What about your boyfriend? – said Deirdre eventually, gasping.
– Are you trying to get rid of me now? – said Madeleine, kissing Deirdre’s chin, her neck, her breasts, nibbling her nipples.
– Am I? – said Deirdre slipping her hand down between Madeleine’s legs and sliding it up hard against her wet cunt. Madeleine opened her legs.
– Let’s get these off first? – said Deirdre, unable to hide her rising excitement. They took off their clothes and stood admiring each other’s naked bodies.
– Would you like me to introduce you to one of my little toys? – asked Deirdre, moving towards her desk. She opened a drawer and withdrew a huge black dildo.
– Little toy? – said Madeleine looking incredulously at the huge black belted penis, which Deirdre was arranging so that she could strap it around her.
– This is my friendly gorilla. You see this bit at the back? – She pointed at another large penis shaped appendage on the inside of the black dildo.
– That goes into me like this. – She sighed as she slipped it into herself.
– As the front penis is touched or moved or played with, or better still thrust into someone, so the other penis pleasures me too. Clever, isn’t it? – When she’d finished fitting black dildo to herself, Deirdre stood, mimicking a man, the great cock swaying stiffly in front of her, making her sigh with pleasure… The great, black member must have been twelve inches long and as thick as Madeleine’s wrist. Deirdre adjusted something and the cock grew even larger, harder and began to throb gently. Again, this made Deirdre groan and rub her own breast and nipples seductively.
– And what do you propose doing with that now? – said Madeleine, laughing.
– I propose to fuck you stupid with it.
– With that? Me? You must be joking. I couldn’t take a huge thing like that. – But Madeleine’s voice betrayed the excited anticipation, which was growing inside her.
– Yes you can. Come here. I said come here, you bitch. Come here, you big cunted bitch! – Madeleine came towards her. – That’s better’, said Deirdre. – Now touch it. That’s right. Play with it. Play with it.

– Now get down on your knees. Down! – Madeleine kneeled in front of Deirdre.
– Now lick it, you bitch. Go on, lick it. – Madeleine grasped the huge penis with both hands and played the end of it around her lips. Deirdre groaned and gripped the sides of Madeleine’s head, pulling Madeleine’s mouth in over the penis, swaying and groaning. Madeleine was now right into this game, feeling more and more aroused by the huge, throbbing penis filling her mouth. She began to suck it, gently at first, then harder and harder, feeling her excitement rising as Deirdre groaned. She felt juices running down her leg and a hot, desperate ache for the giant member in her cunt. It couldn’t do any harm to try this monstrosity. She stood up and leaned back against the desk and opened her legs. She wanted it now. She wanted it. She had to have it.

– Please – she gasped – please, Deirdre, please. Fuck me with your gorilla prick.

Deirdre ran her hand up Madeleine’s legs collecting the thick, juices running freely from Madeleine’s cunt. She rubbed the juices and some cream over the tip of the huge penis. She lifted Madeleine onto the desk, pulling up and opening out her legs.

The cock rested, throbbing and eager, on the lips of Madeleine’s cunt. Madeleine relaxed, opening her cunt lips ready to take it, desperate to get some relief from the throbbing ache of desire, which was burning the whole of her lower region. Deirdre pushed it in an inch, throbbing, filling her, stretching her. Deirdre was panting with the pleasure it was giving her, but was being slow and gentle. More of it was in her. She felt so full and stretched, the firm throbbing cock pressing agonizingly against her rigid clitoris. She felt herself begin to move, up and down around the huge throbbing machine which was giving her so much pleasure. She wanted more, she wanted it moving, pressing her clitoris, fucking her.

Deirdre began to move the gorilla penis it in and out of Madeleine, little by little. Madeleine curled her legs around Deirdre’s back. This brought it further into her. Madeleine eased herself up and down onto it. Deirdre was thrusting faster and faster.

– Oh, Christ. Oh fucking Christ. Oh, fucking cunt. – Madeleine thrust herself up onto the huge member. There must be more than half of it inside her. She felt so stretched and totally filled. Deirdre was screaming, thrusting down on her. In it went, deeper and still deeper. The sensation in her clitoris, her whole lower body was unbearable. She was being fucked, not by a gorilla, but a fucking elephant. – A fucking elephant – she screamed – a beautiful, fucking elephant – and she thrust herself upwards and open, Deirdre thrust herself down on her screaming. The cock went into the hilt. Madeleine screamed and screamed with pleasure. Deirdre plunged into her like a demented animal.

With a few last thrusts, the two of them arched up in a fantastic, mind splitting moment of exquisite, bestial, screaming pleasure.