– OMG, you slut! – I wrote back.
– Hey! You would have done the exact same thing, so watch what you call me.
– I’m sorry, what happened?
– Well, I went out with Richard, and he stopped by his work to show me off. Then, he got jealous of all the guys flirting with me, and we had a fight. So, he drove off, but I was so pissed, I broke up with him.
– So, you fucked all those guys at his job to get back at him?
– No, but if they’d had enough rubbers there, I probably would. – She sent that, then “Have”. To correct her grammar. I guess it just kind of happened. I was just flirting, but there were a lot of gorgeous guys there, and some fixer-uppers, but once we got started I just didn’t care. I found out why it’s such a sausage party there, though.
– Oh yeah? Other than the overall atmosphere of douchey testosterone. Do tell.
– Well, it turns out that a lot of them are gay, or bisexual. So, they hookup there, too. I didn’t blow all of them, but once we got started, the gay guys started fucking and sucking in the men’s room.
– Awe, so you didn’t get to see it? – She knows how I feel about gay and bisexual men. It’s so hot.
– Well, they didn’t do it right in front of me, they took me in the lady’s room. Since that barely gets used at all, but they fluffed some of the other guys right in front of me. They’re really nice about it, they asked first.
– Before what?
– Well, you know, reaching around, and touching it. I only have 2 hands, but they sucked them hard, too. Some of them, most of the guys are bi, I think. Bicurious at least, or if they’re homophobic, then they probably wouldn’t like working out in a gym with all those gay guys. Fucking in the locker room showers.
– Not just fucking, but fucking buttfucking?
– LOL.

The story about fucking became even more interesting…

– They really gave you a pounding, though.
– Oh yeah, I’m still walking funny, and this was like Friday. I didn’t even want to go out this weekend, so I stayed home with the girls. – She means her roommate, and their cats, but her roommate is gay. I mean 100% total lesbian, so she doesn’t even want to see a dick, let alone a room full of them. Which means she doesn’t really have anyone to talk to, besides me. That would understand the way I do.

I’m just going to skip past most of the relationship stuff. IK, Right? Basically all the stuff I tried to tell her about Richard, for months. How he’s possessive, and treats her like a trophy wife, when they’re not even married, and thank god she got out before it was too late.

But what a hypocrite? I mean, he encouraged her to dress sexy, and takes her out to show her off. Just to get all jealous when other guys look at her, and he knows she’s a flirt. What did he expect would happen, the other guys would just get jealous, but not flirt with her?

– I never saw what you saw in him. – Well, I just rolled my eyes, and scrolled down the block of her making excuses for him. All the same excuses no doubt, but I had to scroll down a lot. Pages, and pages of it, but while I was waiting for her to run out, I got up. Got undressed, and went through my gym-bag for some good workout clothes.
– I’m sorry I called you slut.
– It’s okay, I forgive you. I’m not mad at you really, I’m still mad at him, but I forgive you.
– Huh! – I finally squeezed my buns in the biker shorts, but the crotch stretched too tight to actually reach my crotch. My thighs had gotten thick, and even with the too tight lycra. I turned around, and they didn’t look too bad, but I raised my chest, and rocked my hips down. To tighten up my tummy, and push my tits up too. Of course.

Huh, I need the exercise, anyway. I know the place, of course. He bragged about it, but not about all the gay, and bisexual group action going on there, of course. I picked up his phone and why would he work in a place like that, if he’s so homophobic?

– He’s not that homophobic. Some of his best friends are gay.
– Uh! No, he doesn’t want to sound homophobic. Don’t you know that’s the exact same as passive aggressive racists with that 1 black friend, or the Affirmative Action couple they hang out with? And besides, lesbians don’t count. 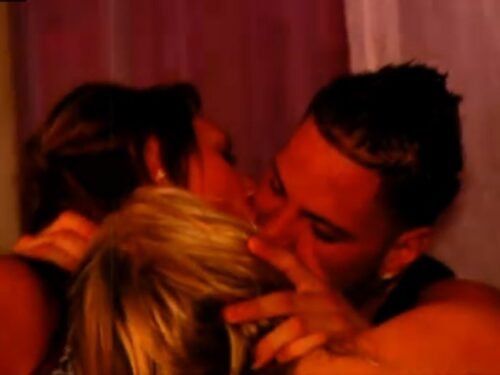 – They’re gay.
– Not to guys like that. Not to douchebags like Richard. He’s not threatened by lesbians, he’s not afraid of them, and he liked the idea of you living with one, because he told me.
– When did you talk to him?
– All the time? We’re best friends, and he was your boyfriend. Oh yeah, and as much as he hated you getting hit on, he sure had no problem hitting on your friends. Even your roommate.
– No wonder she fucking hates him.
– Hated him, past tense, because he was a douchebag, and an asshole. She could smell the testosterone on him.
– Like that’s a bad thing.
– It is when they let it go to their head, and think with their dicks instead. No, having a lot of testosterone isn’t a bad thing, but using that as an excuse for being a dickhead is.