The men were a group who did this sort of thing often. Being all very well endowered they traveled around and found plenty of woman who liked being sluts for their cocks. They also recorded it and put it on the internet and the woman were often back for more. They followed her into the bedroom and for a moment simply watched. She didn’t double check the door, just let it shut behind her and threw herself onto the bed.

Her fingers were in her pussy before any of the men could think. Then the fourth one, Jon took the camera out and started to record the bitch. The other three men strode into the room but still the girl didn’t notice. She fucked herself rather hard with three fingers, but the guys knew that was nothing compared to what she would be feeling in the very near future. 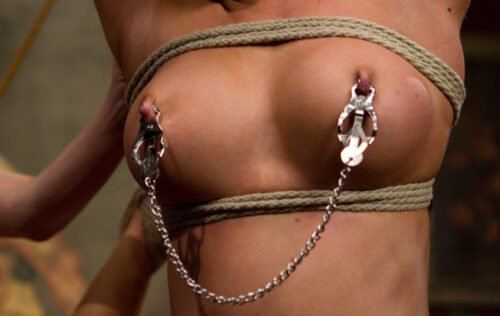 Alex stretched her arms up higher as the men went into the bag they carried with them. Extra tape for the camera and their toys.

– Fucking little slut, we’re going to fuck you until you beg us to stop. Hear me? And give us any trouble and you’ll regret it. Understand? – reaching down he played with her wet pussy giving it several sharp slaps which caused her to gasp and buck towards his hand. – I think I don’t got to worry about you, you fucking whore. Fucking like being a little slut don’t you? Fucking whore – with that he spit in her face as Mark and Max came back. Max had a pair of nipple clamps with a chain between them and a pair without in his hands. Mark had a small flogger with a wooden handle and a bottle of lube. Noticing how wet she was, he threw the lube down, he wasn’t going to need it.

Max attached the clamps with the chain onto her nipples, on the sides. She cried out and arched her back into him when he did because he didn’t loosen them. Even experienced girls would cry out with them that tight. He then attached the chainless clamps onto the other sides of her nipples so they were weighed down and heavy.

Her nipples were clamped up and she was moaning softly moving on the bed. Max slapped her breasts hard. First one then the other. Again and again and again. They slowly turned pinker and pinker until they were red and the girl was crying openly now. But still she didn’t ask them to stop and her pussy was wet. To be honest, she was so wet, her thighs were wet, the bed was wet, and her ass crack was wet. The men would take advantage of that.

Mark took the flogger and beat at her stomach and breasts for a while before he turned it around and rammed the wooden handle into her ass. Jon took a close up of it sticking out as the girl screamed. He started to fuck her hard and fast with it before pulling it out and throwing it to the ground.

– Fuck the toys, this fucking slut is so fucking nasty. She’s loving this shit, she’s craving more. Fucking whore needs to be fucked! – he yelled and bit down on the side of her tit.

She cried out but again arched under him. Alex helped her to stand and Mark sat down. Then he grabbed her and slammed her down on his cock. She was lucky her ass was wet but the lubrication wasn’t nearly enough and she screamed. Mark turned her around so she was on all fours and started to fuck her ass hard. Slamming in and out of it, pulling away totally and then slamming inside again. Jon recorded every second then had Mark pull out so he could shoot her stretched out ass. Alex and Max couldn’t stay out it though and Alex grabbed her hair. With a brutal shove he pushed her head down on his cock. 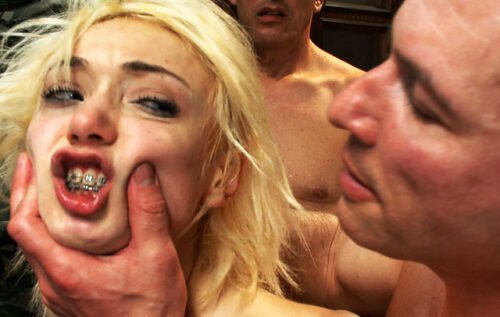 She didn’t try to bite him, instead she took him into her mouth, sucking hard and deep. Then he took control and started to fuck her mouth. Shoving himself in deep and pulling out, then pushing her head down deep again. Holding her there so she gagged and choked before pulling her head away just to do it again.

– Fucking whore… like sucking my cock? Do you like it bitch? Oh yes, suck my fucking cock… Oh yes.. fucking whore… dirty slut.

Max got under her and had them push her down on top of him so he fucked her pussy. He was under her and Alex stood on the ground by the side of the bed. Her head hung over the side and Mark fucked her ass on top. Jon recorded every second of it.

Alex took the camera so Jon could get his cock sucked. For a moment Jon didn’t let her move, simply shoved her head down on his cock, stopping in her throat so she couldn’t breathe. So she choked. He enjoyed the feeling of her mouth gagging on him and he held there for long moments.

The men fucked the shit out of her…

If she had thought that Mark was rough in her ass than she was going crazy from Max. He slammed his cock in hard and pulled out every single time. His hands slapped her ass repeatedly until it was as red as her titties were.

Jon took the camera back and Alex went back to her mouth.

Mark shoved the flogger deep into her ass and left the cucumber there and set her onto her hands and knees. Then he pushed her down so the bed hit both toys and shoved them deep into her. He did it again and again then left her to do it on her own. She did to she fucked the shit out of the flogger and the cucumber moving on the bed in almost a blur. Crying out often. The men watched her, watched the wet spot she made on the bed.

– See that you fucking whore. You liked what we did to you. We fucking did the nasty shit to you and you liked it. Fucking nasty bitch.

Then he pissed on her. Pissing in her hair and on her face. Max pissed on her back and Mark pissed on her titties. She moved and moaned under the hot streams of their piss, which caused Mark to aim upwards and piss in her mouth. Jon however spread her ass cheeks and stuck his cock in and pissed in there, filling her until it flowed down her thighs.

He pushed her down on the bed so her face was in a puddle and her ass was in the air and spit on her. Then he pulled his pants on, and walked out. Followed by the other three men.

She sat there with her sore pussy and throbbing ass, and still she was wet.

[en] My Friend Karen and a 2-day Fuck