She got out of her car and locked it before she shut the door. She took the stuff out of the trunk after opening it. Carrying a blanket and a good book with her as she stumbled through the dense woods.

She finally reached a clearing and gasped at the sight of woods. Acres of green tall grass lay before her. Smiling, she skipped to the spot where she thought was safe to settle down. After laying the blanket down, she laid on her stomach and started to read the book.

The sun shone on her, making her a little hot. She sat up and took her shirt off then laid it down beside her. She resumed back to reading. Deeply engrossed in her book, she didn’t see a shadow fall on her. She jumped when she felt a hand touch her shoulder, stiffling a scream. She stared into the person’s face in bewilderment. She sat up and covered her chest, since she was clad in a sexy bra, there in the woods. The person moved and she saw his face. Sighing with relief as he spoke:
– Did I startle you? I’m sorry.
– Yeah, you did. What are you doing here? How did you know that I was going to be here? – She asked. He shrugged:
– I always came here when I needed the time alone. I didn’t know that you did too. – She motioned for him to sit down. He sat down by her.
– So, well. What are you doing here without your shirt?
– I was hot. So, I thought I’d take it off since no one would see me. I sure as hell didn’t expect anybody. I thought I was the only one who knew this place. – He chuckled. She smiled. His eyes kept on looking at her breasts. She blushed. 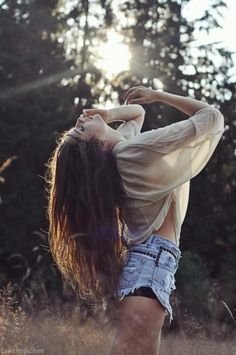 She lowered her eyes, avoiding eye contact. Her chin was lifted by his hand, forcing her to look at him. She blushed. He smiled then kissed her gently. She moved back, afraid of what was going to happen again. He nodded in understanding.
– I guess I better get lost. You look like you need time alone. – She laid an hand on his thigh.
– Don’t go. – He arched his eyebrow. Then he covered her hand with his.
– Are you sure? Seeing you without your shirt is tempting me. It’s like you’re playing with fire, sitting there like that. – She sighed then moved forward to him. Delicately kissing him, she rubbed his thigh. He held back, unsure.

They were feeling hot in the woods

She darted her tongue into his, invading his barrier. He responded with a passionate fervor. His hands found his way around her and pulled her toward him. She moaned in relief. He laid back, still kissing her passionately. He let his hand roam around her body, feeling her and setting her on fire with his touch.

She ripped his shirt, popping the buttons off. Then yanked it off. He chuckled into her mouth. He felt her hands slide toward his torso to his manhood. That was when he became hard. He moved away, panting. She looked at him, lustily. They ripped their clothes off and made an small pile of clothes. Naked, they lay on the blanket, caressing and kissing.

He fingered her wet clitoris as she fondled his rigid shaft. She moaned:
– Oh, god. I can’t wait any longer… – He moved her legs until they rested on his shoulders. Shifting into position, he gazed at her body.

Then he thrust his hard penis into her dripping clitoris. He kept moving back and forth, with her arching her hips to meet his in rhythm. They held back as long as they could then they climaxed. She convulsed as he squirted his juices in her. Then he rested on top of her as she moved her legs off of his shoulders to the blanket. She felt him go semi-soft inside her and smiled.

– You were great. – She complied.
– Thanks. So were you. – She blushed then laughed.
– Guess we are going to go on like it never happened. – He looked at her. She looked back at him. She became nervous. He smiled.
– We could do it again when the mood strikes us, like today.
– Sure… – she faltered for a second. – That’d be nice. – They stared at eachother, lost into their thoughts. Then she added: – Next time, phone me. S- he manuvered out of his embrace, letting his dick slide out. She got dressed in front of him.

– Where are you going? – He asked. She gazed over to him and said:
– Home.
– Home?!?
– Yeah. Thanks for the lesson. Give me a call and we see what we can do… – She bit her mouth, regretting on what she said. Then opened her mouth to say something else but clamped it shut and turned around. She picked her book up, saying: – Keep the blanket and return it to me later. – With that she walked away.

He looked after her, sighing. What did I do wrong – he wondered. I was sure that she liked me. Must be something I did. Not here in the woods, but that day before…

She got in the car, slammed the door and burst into tears.
– Damn it! Why can’t I resist him?!? He’s screwing my life up! I gotta do something about it… – An idea struck her as she hit her fist against the steering wheel. – Oh, boy. – Then she smiled that smile which could freeze the meanest animal.